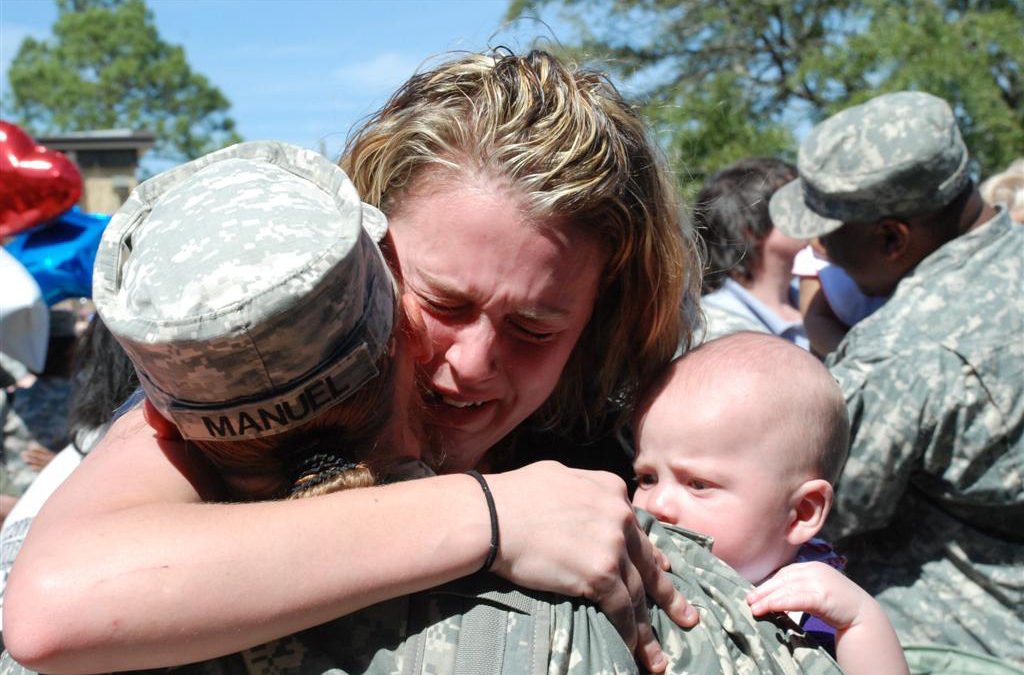 A recent Military.com blog post holds some wonderful advice for wives living at home during deployment. We’ve taken the best quotes from the military wives and put them here for a reassuring voice to the newly deployed. At Once a Soldier, we believe that it’s not just the soldier who serves, and we are in existence to serve the military families at their weakest hour.

The blog post is written by Erin O’Neill and she interviewed a well-rounded sampling of women with husbands in the Army, Navy and Marines, so chances are, they’ve been there, done that, and say this:

“Before my husband deployed to Iraq for the second time, he and I went through a particularly rough patch in our relationship, and found ourselves fighting, literally, all the time. We fought about stupid things, things that didn’t matter, but for some reason, neither of us were willing to let anything go. I remember mentioning this to another wife in passing, and how surprised I was that this build-up seemed harder than his first tour. I felt like I was at my wits end and worried about going into a deployment in this state.”

She simply smiled and said, “Let me give you a piece of advice, honey. If you want to get married to a Marine, and stay that way, you’ve got to realize, you can’t make any major life decisions beginning six weeks before he deploys until six weeks after he gets back. If you do, it’ll drive you crazy, because both of you are out of your mind right now.”

Get Out of the House – Get In The Game

“Find a hobby, or something to invest yourself in, to keep busy while he’s deployed.” “Go out and Experience life! Life doesn’t stop because my spouse is deployed.” Once this woman finally got out and about, she reports, “It was sad that my husband missed those milestones too, but we’re a happier family and or kids aren’t missing out on he experiences.”Try to find a job and keep as busy as possible, even if it’s just hanging out at the pool or going to church every weekend. Just make sure you have plans to get out of the house everyday.”

Get Your Move On

“Look at the bright side of getting to see the world on the government’s dime.” Then when you get the news:  “Once your orders are official, contact the future post’s Housing office and get on a list as soon as possible, if you hope to live on post.” Another tip, which many wives can relate to is “NEVER accept a house, sight unseen. You never know what the housing is like from post to post.” She also recommends taking around three weeks of leave, when possible to accommodate the challenges of moving. “That way, [both my husband and I] can take our time getting there and he’s around to help unpack and set up the house. Nothing is worse than coming home from work to a house stacked with boxes everywhere.”

3- Star Tip: “Write serial numbers of electronics, take photos of valuable items in case something is damaged, and always take the important paperwork (marriage license, birth certificate, passports) with you in the car. If you can’t bear the thought of it getting broken, move it  .”

“I’m a huge fan of the do-it-yourself (DITY) moves. It’s a lot of work, but you can make a nice chunk of change.” Also, check with your local Family Service Center to see if you can sign up for a PCS class or workshop.

Check the Attitude at the Door

So try to look on the bright side and see the positives of this lifestyle. “The military is not a job, it’s a lifestyle. The needs of the Army always come first.” “Life, especially military life, is all about perspective. So make the best of it and enjoy the adventure.”

“A great piece of advice I received was ‘Don’t involve your whole life around his career, do something for yourself.’ So every time we PCS, I make myself a Top Ten list of things I want to do or places I want to go while we’re stationed there. It can also be something simple, like going to the local zoo. It gets me out of the house, and helps me see this as my adventure too, not just his career.”

Turn off the TV

As hard as it is, put down the remote.

“I’m a CNN junkie, but I don’t ever watch the news when he’s gone. It seems like every time I do tune in something is happening where he’s supposed to be, and it’s too hard to worry like that. I spend days terrified something has happened, meanwhile, he’s playing poker with his buddies waiting around for something to do.”

“Only watch the news in moderation. Newscasters are only there to sell a story. Wait for the Army to tell you the truth, and the saying is true. No news is good news.”

It may sound obvious, but most of the wives emphasized how important it really is to make good friends and get involved in the community.

“He told me how difficult it would be. He said to be strong and make good friends, because the Marines and friends we’d make along the way would be very much a family to us and they’d often be the ones who got us through the hard times.”

“Get involved with all local Family Readiness program, “the network is great for support!” It also can keep you informed on some of the resources the military offers like the “J Allotment” otherwise known as the Savings Deposit Program (SDP) into which service members can contribute up to $10,000 while deployed to a combat zone and earn a guaranteed interest rate of 10%. “Put as much money into the account as possible,” Ray suggests. “It keeps you from spending it, and is great for when he comes home and wants that new car or motorcycle.”

“While my boyfriend was deployed, I looked up as much information as I could about where he was and what he was doing. I found his unit’s website, I read and printed all the newsletters. I learned the Marine acronyms and terminology … it helped me feel both educated and connected. I don’t think it would have worked out if he just took off places and I just sat around clueless about where he was going and what he was doing.”

Military wives can’t be shy. Speak up.’ I know that probably sounds like such common advice, but it comes back to me often when I’m in a new place or around a group of people I don’t know.”

“Never believe any of the rumors. We all know that ‘loose lips sink ships’ and that following Operational Security (OPSEC) is a must for mission security, but rumors are just as deadly. So stick to this axiom: Nothing is ever official until it’s in writing, and even then it’s subject to change. As a general rule, I don’t count on anything until his boots hit the ground.

The other side is starting or spreading rumors. But once they’re out, “Listening to all the talk just made for an emotional roller coaster, so eventually we learned to just ignore the rumors.”

The Army is going to operate their way whether you like or not, so learn to be flexible. Life being married to a military member — and staying married — requires that you’re always flexible. Things change fast and often, and it’s absolutely essential that you, as a spouse, are able to roll with the punches as those changes affect your life, too.

For the full articles used in this blog post, please visit: