Ken Amaro of First Coast News Visits Once a Soldier 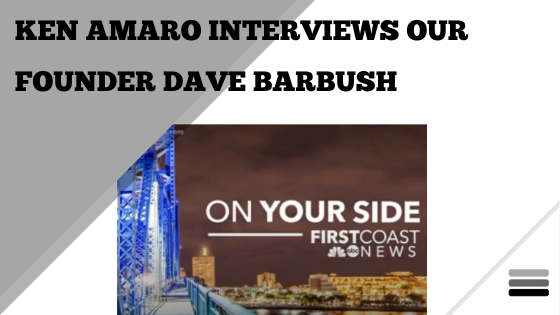 Soldier Suicide Gets Some Primetime Exposure

I’d like to thank Ken Amaro from First Coast News for doing a story on Once a Soldier. FCN enjoys helping veterans in the area and this was a great chance for us to get some serious local exposure. As a young nonprofit, and one that’s built from the digital ground up, credibility is one of our early year goals. I feel we’ve crossed some major milestones and are getting our feet solidly under us in that area. Ken answering my call is a great step up for us, and he will always be one of our Silver Linings.

By way of a story behind the story, I filled out Ken’s online intake form that asked for a brief description of the story. It wasn’t thirty minutes after I submitted it that he called and we set an appointment. Even more amazing, he came out to me and we shot the interview in an hour.

During that hour, Ken asked very good questions and allowed me to inform him about our mission, the need that we face, and how I found this cause. To answer that for you, it was a combination of a few things. First, I have a co-worker, Mallory, who was a young newlywed Navy bride. Her husband, a helicopter pilot, was deployed for 8 months. 8 months! It was then that I realized that the family serves just like the soldier does.

Second, a friend of mine on Facebook took up the 22 in 22 challenge that brought the issue to my attention. Finally, the Google ad grant allows those nonprofits who qualify a very generous monthly ad budget. Taking advantage of that to build this nonprofit, along with the emotional engagement, makes this a pleasure.

Ken Amaro also gave me a link to my site from his site. This is important for SEO for the nonprofit, as well. I’d like to ge more, and we will, but this is a good start.

On the downside, I don’t know if the story really captured what we do in the clearest manner. I know that the mission is simple, and Ken did a great job communicating that. I only watched it once, so I don’t want to make too much of any little off center part of his story. (for example, we’re a Ponte Vedra nonprofit, not a Jacksonville one.) He did a great job and I am thankful to him and his cameraman for doing such a professional job.

Click here to see the video that aired today.

Here’s is the transcript of their story found online:

“You can’t even imagine it,” said David Barbush, “That’s correct. Twenty-two a day.”

“That’s 22 families and they’re left with a mess to clean up financially and emotionally,” he said.

Inspired by a co-worker in 2017, Barbush created Once A Solider. It is a nonprofit to help those families.

“It is a heartbreaking event. I cry every time when I talk with them there’s a need out there,” said Barbush.

The VA’s maximum allowed burial benefits for the families of these veterans is $2000, not enough at times to help those left behind.

He said he is not blaming the VA nor Congress, he is just helping families.

“We are going to do what we can one family at a time,” he said.

In January 2019, Once A Soldier will give the family of Cedrick Taylor of Connecticut $1000. In February, the nonprofit will provide help the family of Jerad Johns of South Carolina.

Barbush was moved by an email he received from the mother of Cedrick Taylor. She simply said thank you for your help.

Barbush said Once A Solider is the silver lining for those military families coping with the darkness of suicide.

The nonprofit has a major fundraiser planned for December. To learn more about Once A Soldier click on the link below: